Feel Good Friday – The one rat we are rooting for 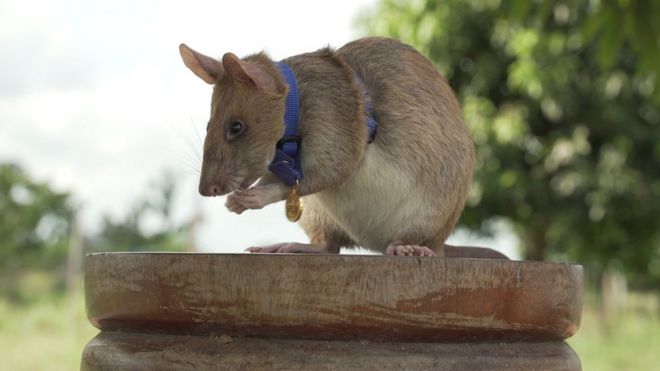 n African Giant Pouched rat has been awarded a Gold Medal for its work in land mine detection in Cambodia.

The seven-year-old rat was awarded a Gold Medal for “life-saving devotion to duty, in the location and clearance of deadly landmines in Cambodia” by the UK veterinary charity PDSA.   The gold medal is inscribed with the words “For animal gallantry or devotion to duty”. Magawa is the first rat to ever receive the award.

Belgium-registered charity Apopo has been raising the rodents, known as HeroRATS, to detect landmines and tuberculosis and landmines since the 1990s.  The rodents only receive certification after a year of training.

Apopo chief executive Christophe Cox told the Press Association news agency that “To receive this medal is really an honor for us, but also it is big for the people in Cambodia, and all around the world who are suffering from landmines.”

It is believed there are up to five million landmines in Cambodia.

Magawa was born and raised in Tanzania and weighs 2.6lbs and is 28in long.  Magawa’s is small enough to not trigger mines if he walks over them.  The HeroRATS are trained to detect a chemical compound within the explosives so they ignore scrap metal and can search for mines far more quickly than a human with a metal detector.  Once they find an explosive, they scratch the top to alert their human co-workers.

Magawa is capable of searching a field the size of a tennis court in just 20 minutes.  That same task would take a person with a metal detector between one and four days.

While Magawa is nearing retirement age he works for a half hour each day in the morning.  According to PDS director general Jan McLouglin his work was “truly unique and outstanding”.  “Magawa’s work directly saves and changes the lives of men, women, and children who are impacted by these landmines.  Every discovery he makes reduces the risk of injury or death for local people.”

According to HALO Trust, a mine-clearing NGO, Cambodia has had more than 64,000 casualties and over 40,000 amputees due to landmines since 1979.  Most were placed during the country’s civil war in the 70s and 80s.