These bi-colored arboreal ants are among the largest ants found in Florida, making them apparent as they forage or fly indoors and out. Complaints are numerous during the spring swarm season, usually between April and June, when winged reproductive are often found in homes in such places as along window ledges and near sliding glass doors. It is common to mistake winged ants for winged termites.

Florida carpenter ants tend to forage at night. The peak foraging hours are just before sunset until two hours after sunset, then again around dawn. Carpenter ants foraging in homes can be in search of sweets or moisture, or even new nesting sites, especially in kitchens and bathrooms, or other rooms that have water leaks from plumbing or leaks around doors and windows. 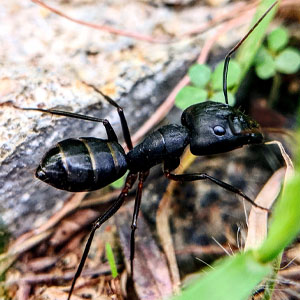 Ghost ant workers are extremely small, 1.3 to 1.5 mm long, and monomorphic (one-sized). They have 12-segmented antennae with the segments gradually thickening towards the tip. Antennal scapes surpass the occipital border. Head and thorax are a deep dark brown with gaster and legs opaque or milky white (Creighton 1950). The thorax is spineless.

This species is a household pest. In Florida, it is considered one of the most important of such ant pests. The ghost ant can not only invade houses from outside, but they can nest in the house as well. Although the ant feeds upon many household foods, it seems to show a preference for sweets, having been observed feeding on sugar, cakes, and syrups (Smith 1965). Outside, the workers scavenge for dead insects and tend sap-sucking insects, collecting honeydew (Ferster et al. 2002).

In Florida, the ghost ant has infested quarantine greenhouses where they have proven impossible to control due to the restrictions imposed on the use of toxicants in these greenhouses. In more northern areas, it has become established in heated greenhouses where it can become a problem, especially if it defends honeydew producing plant pests against introduced biological control organisms.

In Gainesville, the ant preyed upon small beetle larvae and lepidopterous larvae from the cultures of insects in quarantine. The ant is also reported as a significant predator of the twospotted mite, Tetranychus urticae Koch, in greenhouses (Osborne et al. 1995). 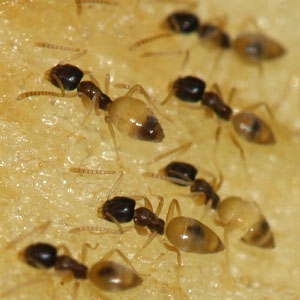 This common household ant is distributed worldwide and carries the dubious distinction of being the most difficult household ant to control. Pharaoh ants will nest in the oddest places, such as between sheets of stationary, layers of bed linen and clothes, in appliances, or even piles of trash.

These ants infest almost all areas of a building where food is available and infests many areas where food is not commonly found. Control of Pharaoh ants is difficult, due to their nesting in inaccessible areas. Treatment must be thorough and complete at all nesting sites, as well as the foraging area. 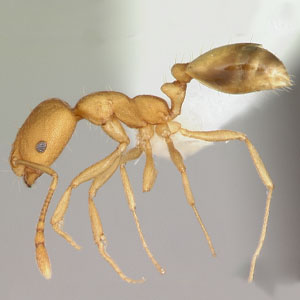 The White Footed Ant does not bite or sting, nor has it been reported to cause any structural damage. White Footed Ants are considered by homeowners to be a nuisance pest because they are frequently observed foraging above ground level in numerous locations within the landscape and home.

Nests are frequently found in trees and bushes, tree holes, under palm fronds and old leaf boots, under leaves on trees, in loose mulch, under debris, in leaf litter (both on the ground as well as in rain gutters), wall voids, and attics. Vegetation favored by White Footed Ants in south Florida includes nearly all palms, especially coconut, sable, or queen, most fruit trees, large Ficus trees, gardenia, hibiscus, Ixora, many plants having showy flowers with sweet nectars, and most plants that are infested with aphids, scales, mealybugs or other sap-sucking insects. 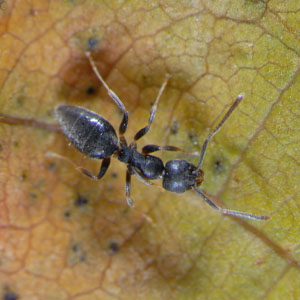