There several different types of termites. Most pest species of subterranean termites in North America belong to the endemic genus Reticulitermes.

Reticulitermes species are found in every state in the continental United States except Alaska but are most common in the warm and humid southeastern region. The eastern subterranean termite, Reticulitermes flavipes is the most widely distributed and is found in the entire eastern region of North America as far north as Ontario, Canada, and south to Key Largo, Florida.

Alate wings of Reticulitermes species have two hardened and thickened veins that are visible along the entire front end, but lack the small hairs that are characteristic of the Formosan subterranean termite, Coptotermes formosanus Shiraki. After indoor flights, most alates are found dead near windows or in sinks and bathtubs – usually with their wings still attached. As with other termite species, Reticulitermes colonies contain three primary castes; the reproductives (king, queen, alates, alate nymphs, and supplementary reproductives), soldiers, and workers. Alates and soldiers are used for species identification.

Soldiers of subterranean termites (Rhinotermitidae) are distinguished from those of drywood or dampwood termites (Kalotermitidae) by their smaller size and the relative width of the pronotum. In subterranean termites, the pronotum (segment immediately behind the head) is narrower than the head, while in kalotermidis they are equally as wide. Reticulitermes soldiers are further distinguished from those of Coptotermes formosanus by the rectangular-shaped head of the former compared to the oval-shaped head of the latter. Subterranean termites form a network of interconnected feeding sites beneath or above the soil surface. A single colony of subterranean termites, especially those of Reticulitermes flavipes, may contain 100,000 – 1,000,000 termites and forage up to 150 feet in search of food (Su et al. 1993).

When subterranean termites search for food aboveground, they may enter a house through small cracks or joints in the foundation, or by building shelter tubes along the foundation wall. These tubes are highways connecting the underground termite population with aboveground food sources. Because termites consume cellulose, the main structural components of plant cells, any wood material in a house is a potential food source, but they may also damage non-wood material in search of food.

Because termites rarely show themselves in the open, infestations can be difficult to detect until the damage becomes severe. In addition to the presence of alates and shelter tubes, wood material can be probed with a screwdriver or ice pick to locate infested wood. The surface of severely damaged wood may appear blistered or peeling, as termites hollow out the wood leaving a paper-thin surface. Reticulitermes tend to cover the wood they feed upon with soil, thus giving wood a more “dirty” appearance than Coptotermes formosanus-infested wood. However, it is not advisable to identify the termite species based solely on damage as there are many exceptions. 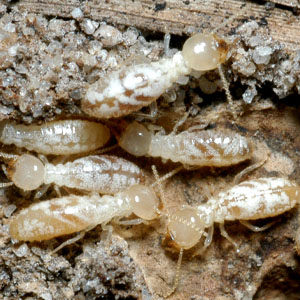 Drywood termites typically infest sound or nondecayed wood in older homes. Places they can be found in a home include wood flooring, attics, wood frames, fascia boards, window sills, doors, and furniture. Drywood termites survive best at 60°F but have been reported in temperatures of 110°F. Initially, winged termites known as swarmers or alates will enter cracks and openings in wood to start new colonies.

These termites have evolved to be able to survive in environmental extremes. This is important because, unlike subterranean termites, drywood termites cannot retreat to the soil when conditions are unfavorable. A good way to know if there is a drywood termite infestation is from their six-sided fecal pellets, known as frass. These fecal pellets are removed from drywood termite nests through small “kick-out holes,” which are about 1 to 2 mm in diameter. These are normally found in mounds and have been described to look like sawdust or coffee grounds. These are usually light tan to almost black but have no relation to the color of the wood the termites are feeding on. If rolled between your fingers, you will notice a gritty texture of the pellets, this is a way many pest control operators identify drywood termite feces. 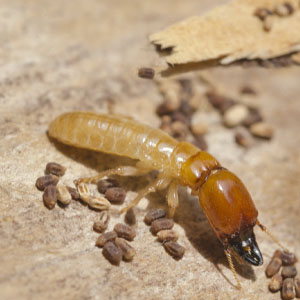 Dampwood termites infest wood with high moisture content. They do not need soil contact in order to sustain themselves but are commonly found in wood contacting the ground. They are commonly found infesting damp or decaying wood, logs, stumps, and dead trees, but will commonly attack structures exposed to moist soil and high humidity.

Although dampwood termites can cause significant damage, especially in association with decaying fungi, they are considered to be the least economically destructive pest. Finding dampwood termite infestations can be a little tricky because there is little visual external evidence of their presence; they do not produce mud tubes or create visible open holes in the wood. They hide very well in the wood to prevent themselves from drying out, plugging holes with fecal material. Tapping wood that sounds hollow or feels soft is a good sign of a dampwood termite infestation. 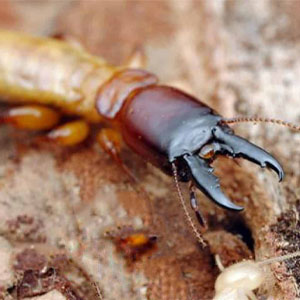