Only two of the 18 Nearctic species of Vespula are known from Florida (Miller 1961). These are the two yellowjackets: eastern yellowjacket, Vespula maculifrons (Buysson), and the southern yellowjacket, Vespula squamosa (Drury). One species of Dolichovespula is also present: the baldfaced hornet, Dolichovespula maculata (Linnaeus). The baldfaced hornet is actually a yellowjacket. It receives its common name of baldfaced from its largely black color but mostly white face, and that of hornet because of its large size and aerial nest. In general, the term “hornet” is used for species which nest above ground and the term “yellowjacket” for those which make subterranean nests. All species are social, living in colonies of hundreds to thousands of individuals.

The three species of Florida yellowjackets are readily separated by differences in body color and pattern. Identification is possible without a hand lens or microscope, and, for this reason, a simple pictorial key is all that is necessary. Color patterns are relatively stable, and their use is further strengthened by morphological characters (Miller 1961). Queens and workers may be separated by abdominal patterns; males have seven abdominal segments while females have only six. 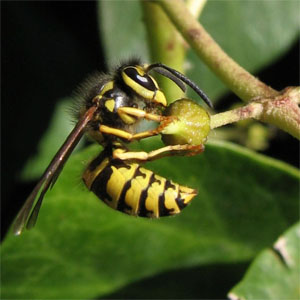 Several wasp species can be found around the yard. Although wasps feed on insects such as houseflies and garden pests, some can also be dangerous to people. Most wasps typically ignore people. For example, social insects that live in colonies will readily sting when they perceive their nest or territory is threatened while solitary insects only sting in self-defense when mishandled. In addition, only female wasps can sting. In any case, it is best to regard any wasp with care before attempting to control it, since stings can be very painful. The best and easiest way to tell wasps apart is to look at the relative size of the wasp, and the pattern on the abdomen.

Small wasps include yellow jackets and white grub parasites. Yellowjackets are social insects. Fertilized queens overwinter, then start a colony in the spring and provision the first brood of young. Once the first brood has matured, they will take over the provisioning duties, care for the queen, and the following broods throughout the summer. In late summer, reproductive males and females will be produced, which consequently mate and then the females overwinter (colonies always die out at the end of the year). In order to eliminate yellow jacket wasps that are in direct competition with humans, the entire colony or nest must be eliminated. Football-shaped nests may be either in the ground or above ground and will be paperlike.

White grub parasites, usually of the genus Scolia, are solitary wasps. They fly low over lawns in mid- to late summer. They will insert their eggs inside white grubs, which are pests of lawns. The wasp larvae will feed on the grubs as they develop. These wasps are in far less competition with humans. However, they will sting if disturbed. 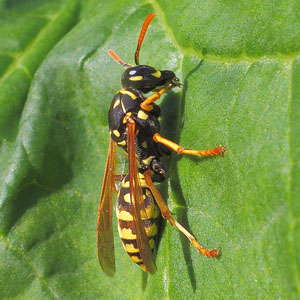